4 Days To Go – Clueless and Wuffles are Heading to Glastonbury (and other BIG news)!

Rehearsals for Clueless and Wuffles: the Case of the Missing Jewels are now complete, with a dress and tech rehearsal dusted over the weekend.  Now it’s just a waiting game before we head down to Worthy Farm for the festival itself. 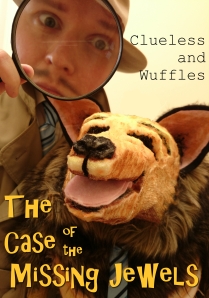 In case you didn’t know (or you’ve lost the ability to scroll down to the post underneath this one), I’ll be performing as DCI Clueless – a hapless and unbelievably vain detective who, along with his faithful Sergeant, DS Wuffles, must hunt down the stolen Crown Jewels.  The show will be performed at the Panic Circus Big Top on the Kidz Field from Thursday the 26th until the close of the festival.

If you’re at Glastonbury this year, keep an eye on the hashtag #wuffles for show times, pictures and all kinds of random micro-blogging goodness.  I look forward to seeing you there!

I’ll be writing up my experiences and thoughts on the festival for Frost Magazine upon my return.  Keep a weather eye out for that.

In other news, I’ve recently been cast in “Justice”, a site-specific theatrical event being held at Lancaster Castle over the Summer this year.  Work has already begun on the show, with showings taking place on weekends through July and all week through August.  More on that in my next blog post.

Plans are progressing on a funding application for a big show in March 2015.  The project, which I’ll be keeping under wraps until things are a little more firmed up, has a producer, director and musical director attached, with work due to begin on the script and music in August/September.   We’ve finalised an initial budget and our first funding bid goes in this week, with a further GFA bid emerging in July.  I’ll update you on details for the show once we know that it’s definitely happening (fingers crossed!)

And, to round things off, I’m continuing my work as a medical role-player and enjoying it immensely.  It’s a fantastic team of actors to work with and a marvellous team in charge.  I’ll be jetting back up from Somerset for another performance the day after Glastonbury (I know!)

Until next time, stay frosty!

Down on the (Worthy) Farm: Glastonbury Festival 2014

Today I can officially announce that I’ll be starring in a brand new stage show at Glastonbury Festival in June 2014.

The new show, Clueless and Wuffles: the Case of the Missing Jewels, is a family comedy farce.  Packed with slapstick, song and puppetry, the show has been put together for Professor Panic’s Big Top and will be performed on the Kidz Field.

I’ll be starring as DCI Clueless, a vain detective who’s as inept as he is self-absorbed.  His faithful canine partner, DS Wuffles, supports him by,…. well, by solving all of his cases for him!  But have they met their match when the Crown Jewels are snatched from the Tower?

It’s a fantastic show and a brilliant showcase, and I’m thrilled to be taking on yet another leading role for my long-time collaborators at Rough Magic Theatre.

If you’re at the festival, do make the trip across and enjoy the show!

Glastonbury 2014 takes place between the 25th – 29th of June at Worthy Farm near Pilton in Somerset.  For full details of this year’s festival, click here.